Norman Behrendt: On Grasping the Ungraspable

Norman Behrendt (b.1981, Germany) is a Berlin-based visual artist whose main aim is to raise critical awareness of the political and social changes of our time. His work is on the verge of documentary and conceptual photography, mingling between truth and fiction. In line with this thematic, Behrendt’s latest photobook Blueprint (2017-2020), published by Kult Books, examines mass media influence on political debates and democratic processes demonstrated in the event of Brexit.

In this interview, we talk with Behrendt about his book and views on mass media’s influence on today’s post-truth political environment. 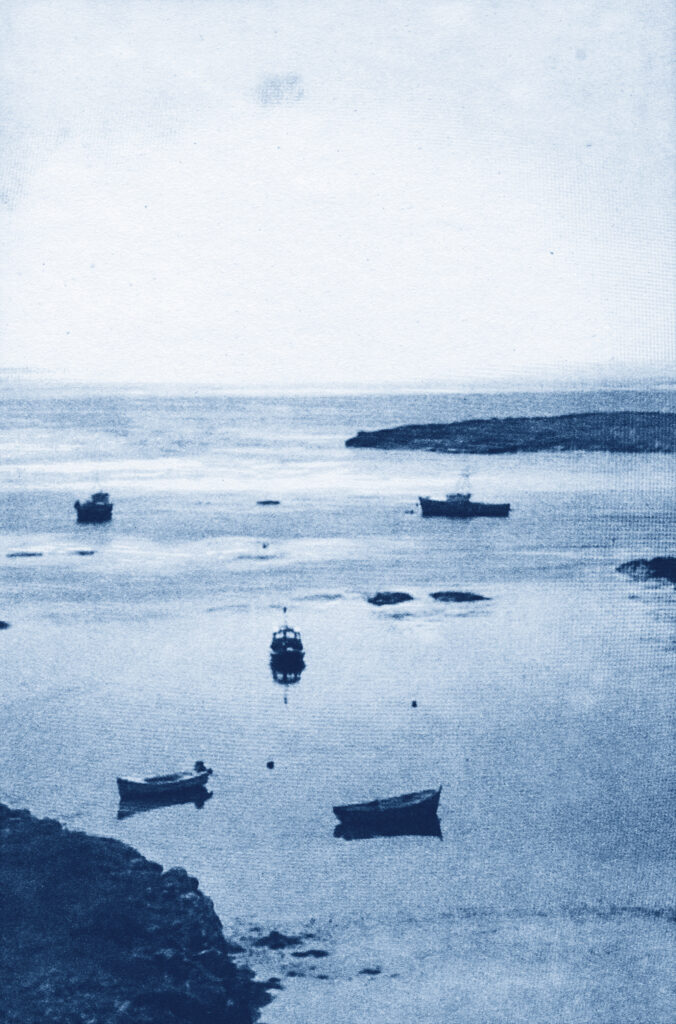 Blueprint spans over four years – 2017-2020. It combines materials you collected when you lived in London and during the day crisscrossed the city’s suburbs and then later, you started working with images you took from pro- and anti-Brexit videos you found on the internet and social media. Since this is a long-term project, could you please share some insights into your editing process?

I started the project when I was studying for my master’s degree. It was a very specific moment in time. It was around one year after the referendum – the smell of Brexit in the air – and everybody was talking about it, so I decided to use this momentum and produce work about it.

Besides, I wanted to develop and expand my horizon as an artist, though not sure “how” and “in which direction” to go. Brexit is something hard to photograph – everybody talks about it and everybody has an opinion on it, but still, it’s so complex; and that’s why it was impossible to approach this subject in a conventional way.

I was photographing for about half a year in the outer boroughs of London where the majority of people voted for Brexit. At the same time I was visiting  the inner districts that overwhelmingly voted for remain. These boroughs felt completly different to me and of course there was Westminster, the political centre of London. While photographing, I was researching in-depth in the libraries about the topic and doing screenshots from all sorts of Youtube videos from crucial events. At some point, I felt that the amount of material I collected was overwhelming, but I also realized that most of the images weren’t “mine”.

There was a period when I tried to combine the visuals through collages. That was a sort of transition period when I felt closer to what I wanted to say, closer to the question of ” How did it happen?”, yet still, it felt like a compromise.

In the end, the imagery that ended up in the book is only found footage.

[…] Brexit is something hard to photograph – everybody talks about it and everybody has an opinion on it, but still, it’s so complex; and that’s why it was impossible to approach this subject in a conventional way.

[…] I felt that the amount of material I collected was overwhelming, but I also realized that most of the images weren’t “mine”.

When did you know that you have enough materials, and the project is finished?

It’s a challenge to stop a project because it’s always possible to continue. However, this time, the time frame was set by the deadline given by my studies. We were all working towards the end result, which was an exhibition – the end of the first phase of the project called “Blueprint, 2017-18”. The second part of the work “Blueprint, 2018-19” I realized after my return to Berlin. The book offers a non-chronological edit from the archive of images that make up the two parts of the project. 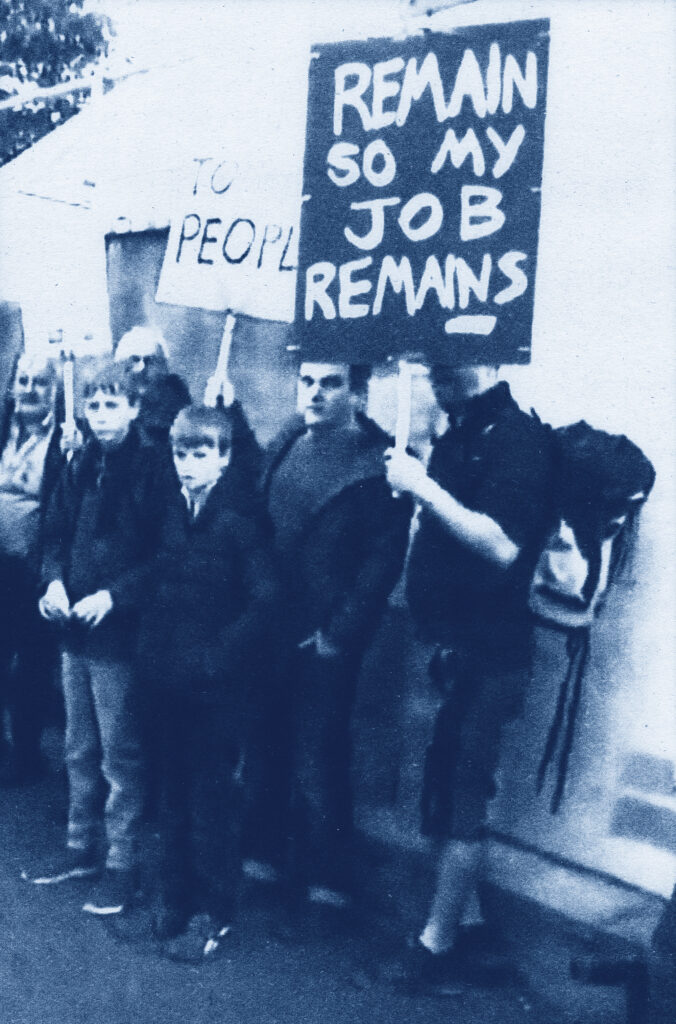 […] It’s a challenge to stop a project because it’s always possible to continue.

Why did you decide to work with cyanotypes for this particular project?

When I decided to work only with found imagery, the quality was not great, most of the images were pixelated and they didn’t really fit together in terms of colours since they all came from different sources. I didn’t want people to immediately notice where the images originate from. That was one of the main factors why I decided to work with a technique that unifies the materials.

At the same time, when I dived into the leave vs. remain campaigns, it was important for me to not show my inclinations towards one or the other side. I wanted to keep the complexity of the topic as both sides made it sound so easy to just go either left or right in this matter.

Then one day, I saw my colleague from the university working with the cyanotype technique and I was very fascinated by it, especially how it always turned blue. At that moment, it clicked, and I knew that this would be a perfect technique to make the materials more coherent. The reference of blue is the topic in itself.

Interestingly, blue was the colour of the parties that supported the leave campaign while blue predominates the European Union flag, so it corresponded with both sides and their invisible influence. 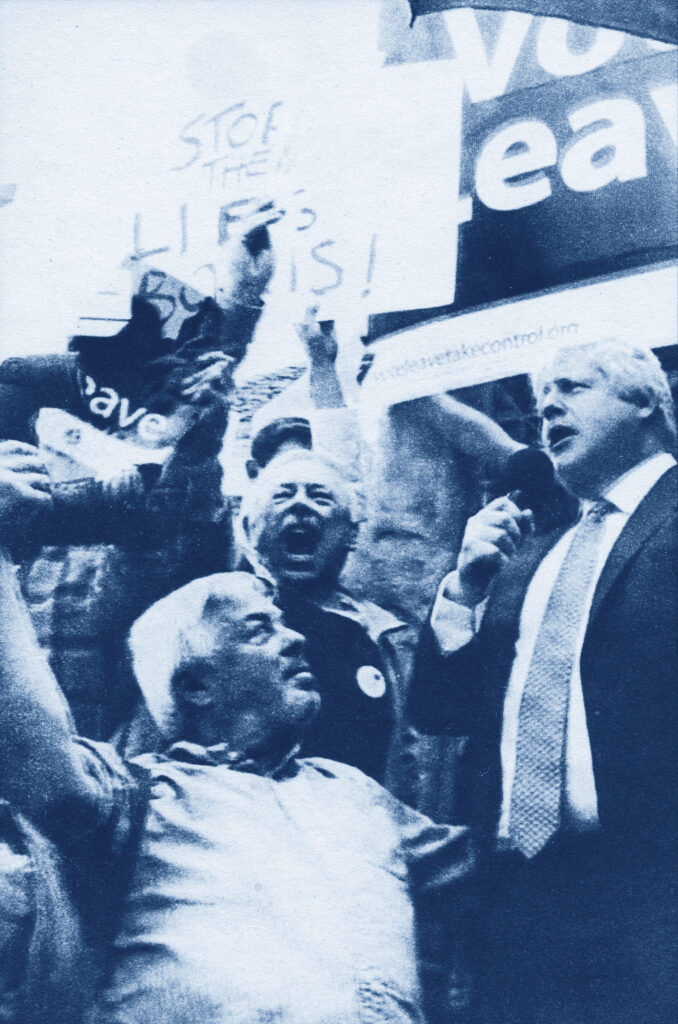 What I find interesting about Blueprint is the fact that you are trying to visualize something that is not visible to the human eye. Yet, the relationship between the EU and the UK could be felt by many in the air for a long period of time especially during the progression of Brexit. Your photographs then turn into visual metaphors… How do you find your balance between documentary and conceptual photography?

I see myself as a documentary photographer or perhaps now, I used to be one… As I explained earlier, I had to find a different way of capturing this topic, escaping mere documentation. I sort of looked through the eyes of the media and the individuals who captured the videos. This was my prism from which I approached the topic and then, of course, the choice of final images and framing presented my point of view in the form of visual metaphors. 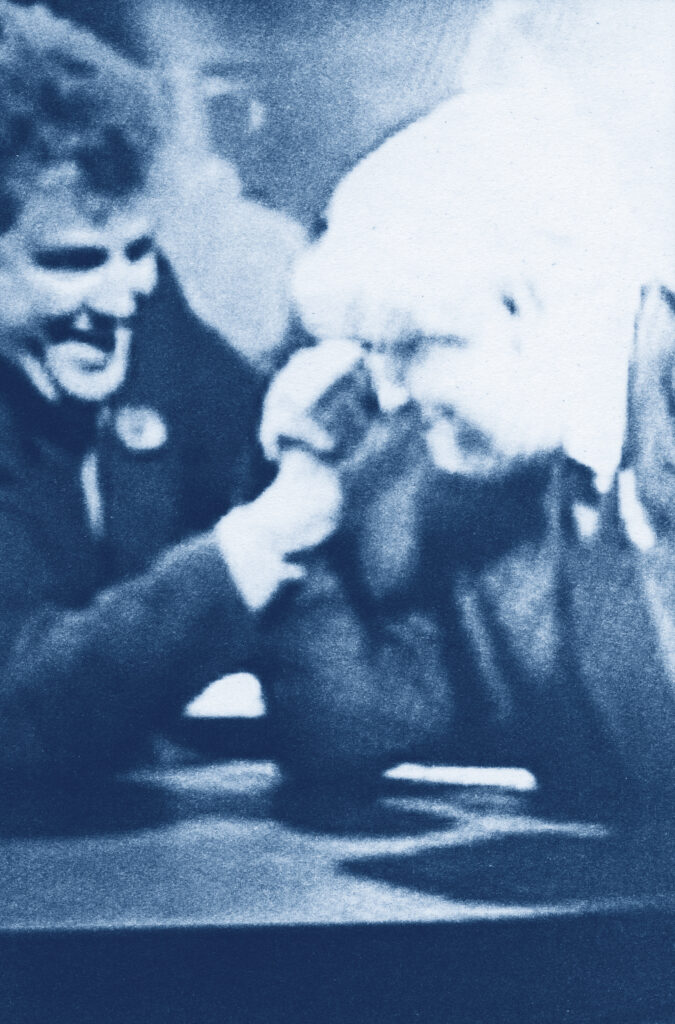 Blueprint lies somewhere between research and intuition. Your photographs are presented in a non-chronological manner. They depict bureaucrats, birds, crowds, and gestures. These abstract images are then combined with an essay by art historian Lucy Soutter and an extensive appendix featuring crucial texts and speeches about Brexit and EU-UK relations. To what extent do you find text crucial for your work?

In contrast to the exhibition where almost no text was included, I used the book as an opportunity to make something people come back to and get more information about the topic if they want to. I feel overall context is important for photobooks and for me the symbiosis of text and imagery generates more layers in addition to the abstract photographs. Otherwise, I think people might have problems deciphering the images and thereby the work.

Lucy framed my work in the socio-cultural context while the appendix provides details from crucial events that lead to Brexit. It features for instance important speeches, showing that the relationship between the UK and Europe can be described as a constant pull and push – for and against the union. The EU referendum marks just a tipping point of a long-lasting relationship.

[…] If we are interested in certain topics as photographers, we always have to break them down somehow – to find our own ways of photographing things.

Would you say that Blueprint’s aim is to raise awareness about the impact of images/mass media on historic transitions?

I guess, the aim for me is to challenge myself to depict complex topics through the medium of photography, to make it more graspable. If we are interested in certain topics as photographers, we always have to break them down somehow – to find our own ways of photographing things. For me, this becomes even more important when the topics are not easily representable.

Also, I consider myself a politically concerned person and Brexit was a shock for me and I felt its impact both on me and my close friends. It, therefore, led me to show historical events like Brexit not necessarily as an end but rather to put them into question, something to contemplate about…

Blueprint was published by Kult Books and is available for purchase in regular edition here and in a limited edition here.