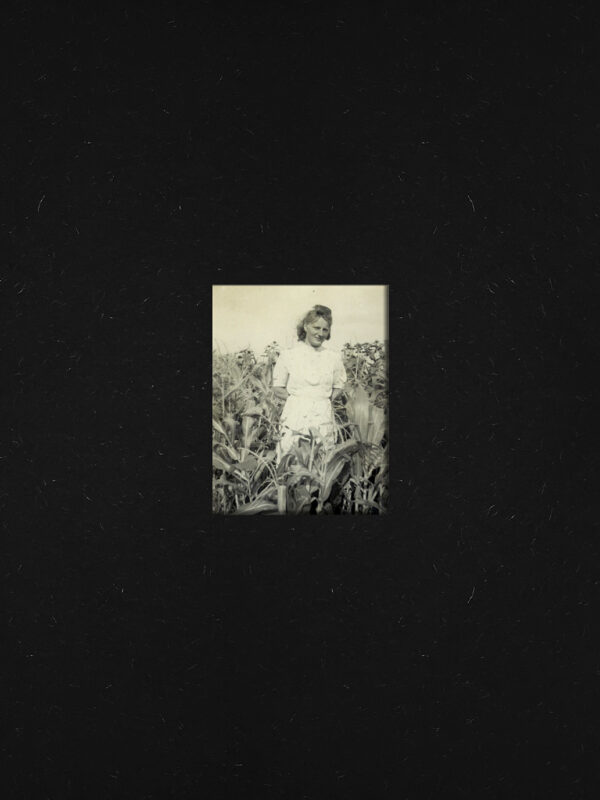 With his latest photobook, Tomasz Laczny (b.1974, Poland) goes back to his roots and explores his family history and particularly, that of his grandmother. When at the age of seven he visited his grandmother during one weekend, a strange man with a prosthetic hand appeared at her door. He spoke German to her and to Laczny’s surprise, she fluently continued in the conversation. He realized that she was German as at the time it was highly uncommon for Polish people to speak any other language than Polish, and certainly not the language of the WWll enemy. Triggered by this uncanny encounter and sudden revelation about this new part of the artist’s identity, he was compelled to dive deeper and re-discover the story of his grandmother – Erna Helena Ania.

On the first pages of the book, we can find Laczny’s drawings that bring us to deep forests and a seemingly dark place where a woman gives birth secretly and in pain. We later learn that these drawings reflect upon the experiences of his grandmother who at the end of the WWll fell in love with a Polish man. Living on the Polish-German borderland, this type of relationship caused an immense danger to both of them. A relationship between the enemies could even result in their death. She got pregnant and shortly after the war, she was imprisoned in the camp for Germans where she had to give birth to the author’s mother in appalling conditions. Her daughter was taken away from her… 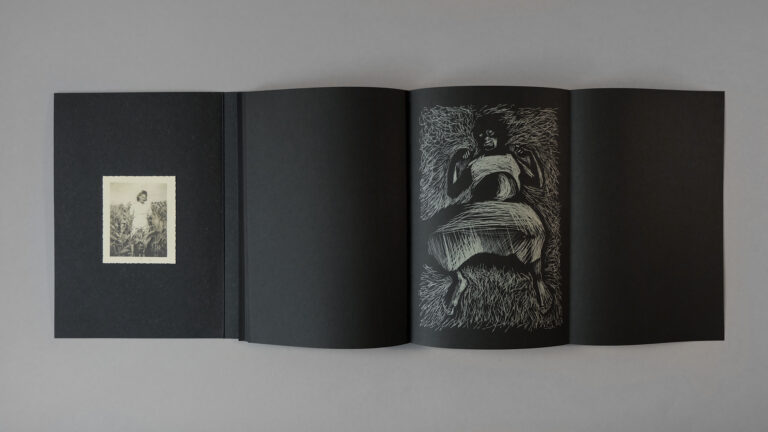 After the war, the European borders have shifted, and the vast majority of Germans were expelled from the Polish ground. In the hope to be reunited with her daughter, Erna stayed and tried to get Polish nationality. Living as an ex-German on Polish ground was extremely difficult for her as she had to live in the shadow of Nazi Germany and their actions towards the local population. Many years have passed until she could have been reunited with her daughter.

Laczny presents this painful story in a carefully curated publication where archives, drawings and newly created imagery intertwine. In the inner section of the book, photographs from Erna’s life are combined with numerous documents and inserts such as a birthday postcard, birth certificate, a letter from a lawyer certifying that she is the mother of Laczny’s mother, among others. All these inserts – intimate insights into her personal life – make the character of Erna Helena Ania more tangible and strangely familiar.

“All these inserts – intimate insights into her personal life – make the character of Erna Helena Ania more tangible and strangely familiar.”

As the author of ‘Forget Me Not: Photography and Remembrance’ Geoffrey Batchen argues in his book, the inclusion of handwritten text together with imagery, augments the images’ memorial power. Therefore, the text, for instance, on the backside of each postcard makes the photographs more alive and “enhances their capacity to arouse emotions.” Since Laczny re-created the various documents into loose inserts that accompany the images, they become traces of his grandmother, strengthening our perception of the visual materials as authentic and memorable; additionally, suggesting the importance of print as the same effect could not be achieved in a digital format.

Furthermore, in her seminal publication ‘Family Frames: Photography, Narrative, and Postmemory’ literary scholar Marianne Hirsch refers to family photographs as a false illusion in the sense that they are exact documentation of the real which as a result, naturalizes cultural practices in the form of circulation of familial myths understood as actual moments in family history. Family photographs can, therefore, be considered as a space of contestation, due to their immediate association with the realm of the real. 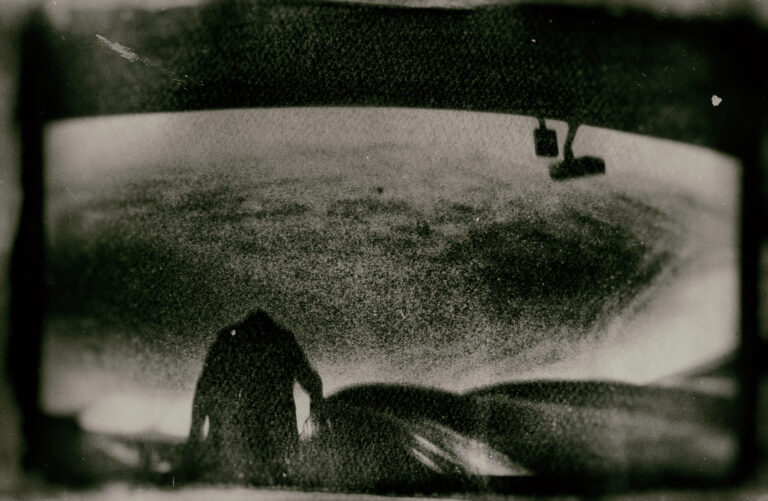 “The careful edit of the book through which we oscillate between the past and present traverses the merely indexical layer.”

The trend by contemporary artists is thus to displace this dichotomy by re-arranging the materials to explore their personal life story and identity which is something conducted by Laczny as well. The careful edit of the book through which we oscillate between the past and present traverses the merely indexical layer. His newly created, dark, abstract and blurry close-ups of bodies and flowers rather focus on the impalpable; the emotional aspects of this family trauma and the subsequent confusion and reverberations in Laczny’s life. The photographs are centred around forms, shapes and textures, resembling paintings where the series’ iconic characteristics come to the forefront.

In ‘Erna Helena Ania’, there is tension between the story of Laczny’s grandmother and that of his own. His memory is formed based on what his mother and family told him alongside his fragmented childhood memories. Flipping the pages feels as if a story was told by multiple narrators and eventually, from these remnants, we make up our own story. 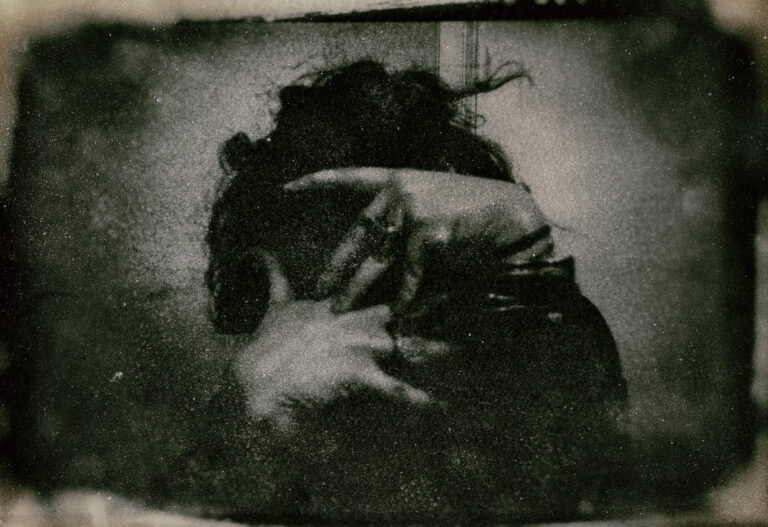 “Flipping the pages feels as if a story was told by multiple narrators and eventually, from these remnants, we make up our own story.”

The silent graphic novel sections both open and end the book, providing a narrative element and a bridge between the past and present. The ending sequence shows Laczny revisiting the camp in 2009 during Christmas together with his mother. As the author reveals in the foreword of his book, the body of work additionally reflects on his identity struggles and the absence of his daughter who he hasn’t seen for almost three years.

By the end of the series, we realize that photographs and documents are the only things that will remain of us. Piercing as it is, this shared vulnerability evokes a mode of subjective experience that enables us to observe the work empathically. ‘Erna Helena Ania’ is a deeply layered and complex publication that was ten years in the making. It requires the viewer to come back to it at different times to unveil the previously unnoticed details. There is always a hidden element waiting to be explored.

is a visual artist, researcher, bookmaker and educator who in his practice mainly focuses on making photobooks. Formerly, he worked in the field of commerce, creating computer-generated images that mostly reflected futuristic visions. However, now, his concentration has shifted towards the past and particularly, his own family history as is the case with ‘Erna Helena Ania’.

The publishing house BLOW UP PRESS was founded by editor Grzegorz Kosmala and designer Aneta Kowalczyk in 2012. Originally, BUP was an online publisher that converted to print in 2016. Currently, they are based in Warsaw, Poland and focus on making photobooks that reveal thought-provoking stories reflecting on the contemporary world.

Erna Helena Ania has been recently acquired to the MoMA library collection and is available for purchase here.